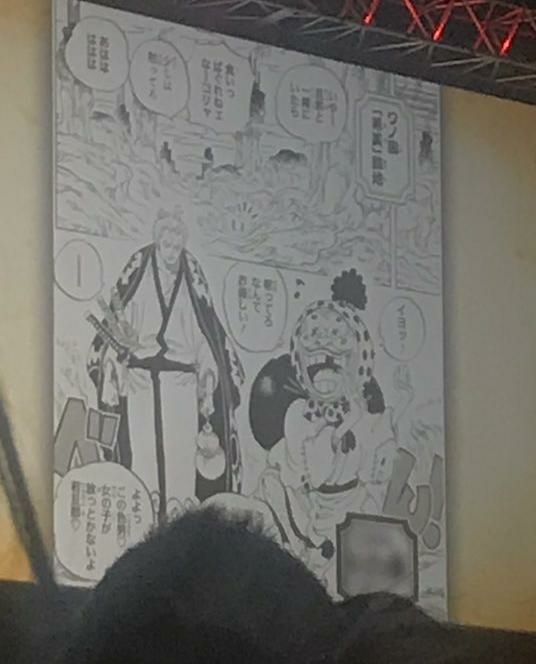 As for chapter 928, it was a nice chapter with little plot progression but nice layout and foundation building for the upcoming chapters.

Komurasaki-dayu has indeed been portrayed as dazzling. The flashback showing that man and his foolish naivety was a bit too long for my liking. It's a realistic story nevertheless. Not too much happened in the 2nd part of the chapter - just Karibou's official reintroduction (and I was never a fan of his character in the first place) and a couple of reminders of how Kidd earned his reputation. What I did appreciate very much was Luffy's kindness when he gave food tickets to Grandpa Hyou.

Finally, there was Momonosuke training in Amigasa village. It would be really nice if he and Tama bonded as lifelong friends. I wonder if Oda has intentionally made it so obvious that Komurasaki is such a strong candidate to be Hiyori. There was classic foreshadowing with how Momonosuke said he wouldn't meet her until the war is finished, how he's scarred for her life because Orochi's still in power while Komurasaki's basically going straight to Orochi.

What would be very interesting is if all Komurasaki did by stealing from customers was to gather funds for the rebellion against Kaidou and Orochi.

Polgarena said:
What would be very interesting is if all Komurasaki did by stealing from customers was to gather funds for the rebellion against Kaidou and Orochi.
Click to expand...

Which would turn the same as with Nami in Arlong Park arc.

Forbidden Tale said:
Which would turn the same as with Nami in Arlong Park arc.
Click to expand...

Arlong park was so long ago, which is why I wouldn't see it as repetitive.

There are a lot of chapters released since I did reviews so I shall summarize my thoughts on each series since then:

Now you can read One Piece on Shueisha's official MANGA Plus app: https://mangaplus.shueisha.co.jp/#/titles/100020

This was a mostly fun chapter. Orochi's official introduction wasn't as eventful outside of CP0 trying to negotiate the weapons directly from the shogun now that Joker is incarcerated. Franky's fruitless search for the blueprints was by far the most enjoyable part of the chapter. And it looks like more trouble is in store for Sangoro and Law. It's interesting that the strongest Headliners, lead by X-Drake (with Hawkins as a bonus), are after them. Drake's hybrid form does look quite good.

This was a rather average chapter for OP's standards. There was little to no plot progression, but at least the concept of Ebisu Town was interesting and we got a tiny bit closer to discovering who the Whiching-hour (Ushimitsu) Boy is. I have theorized that Komurasaki is Momonosuke's sister Hiyori, but what if she's also Ushimitsu and giving the money she receives by duping men to the poor people of leftover towns?

Usopp was (awesomely) funny; I missed his antics. I guess it's interesting that Sanji's ready to face Page One this early - in a Raid Suit nonetheless. The world (which includes Kaido's biggest subordinates), by now, surely knows that Black Leg Sanji and Vinsmoke Sanji are the same person. I'm far more interested in plot progression and lore at this point, so I'm not feeling the hype surrounding the imminent fight.

Big Mom was a surprisingly nice addition to the chapter. She's still a force of nature and a Yonko for a reason, being able to come this close to Wano, even though King put her onslaught to a halt. There's really a bunch of dinosaurs within Beast Pirates' ranks so far.

The was a fun chapter even though it didn't contribute to the plot progression. Fun, because it combined Usopp and Franky's amazement with Sanji's transformation sequence and Law's detailed narration. There's also a touch of literary irony in the fact that Sanji acquired invisibility through the Germa technology days (or hours) after Moriah witnessed Shiryuu of Blackbeard Pirates using Absalom's DF abilities. I am somewhat glad Sanji achieved his dream after so, so many sagas and chapters. Finally, how unexpected that Big Mom washed ashore on the same spot Luffy did, with amnesia even.

Chapter 932 "The Shogun and The Courtesan"

This was an okay chapter, the takeaways being:
~ Robin's body double. It was a smart move not to personally search through the documents. A cool move too.
~ The irony of nobody actually believing Shogun Orochi even though he has a point that there is a conspiracy to overthrow him.
~ Orochi's quite cartoonish, a bit like a caricature, but it serves the the purpose to show how impulsive, rash and vain he is.
~ Poor Otoko (is she from Ebisu town).
~ I find it hard to believe that Robin is really Ushimitsu Boy. Rather, she came up with that answer in the spur of them moment.
~ Komurasaki slaps the shogun as a true daughter of a samurai who does not bow down - she's got a strong spirit.
~ Orochi's DF/Smile form is in line with the Yamata no Orochi legend.
E

Why no posts here in a long time guys?

Evenstar said:
Why no posts here in a long time guys?
Click to expand...

I didn't want to spam the thread with my posts/reviews now that not even Gohara is posting his thoughts on the chapters. I miss the old times when we'd get at least a handful of posts about the most recent chapter here.
E

Polgarena said:
I didn't want to spam the thread with my posts/reviews now that not even Gohara is posting his thoughts on the chapters. I miss the old times when we'd get at least a handful of posts about the most recent chapter here.
Click to expand...

What happened to Gohara

I'm not very impressed by the minks' sulong... All of their transformations look like Pekoms' in that the face is the same but their manes stretch out to look like wet dough. I feel like Carrot's elaborate sulong design set a bad precedent in that it gave the audience an expectation that all of the minks had unique designs when they transformed. Apparently that wasn't the case *shrugs*

Aww yeah, another Number has entered the scene. I believe it's safe to assume that all of the numbers names are the same as their personalised laughs; Jyuki (10), Kunyu (9), Hacha (8), Nagi (7) and Goki (5). Perhaps their names were chosen for them based on their laughs? Like, they don't have the ability to speak coherently because a) they actually are a race of oni that lived on Onigashima and joined Kaido when he was bolstering his forces in Wano or b) they were victims of vegapunk's research on Punk Hazard like Kaido, although the latter is a personal theory of mine (for another time). Regardless, we'll have to wait and see what kanji Oda uses for the names of the others but 8-Tea and 7-Oni are the ones we know of so far and I don't really see a theme developing yet.

Furthermore, even though Nagi's height is close to that of the short Number we saw marching in Chapter 954, I don't think he's the same. First of all the arms - Nagi's got thick arms and the silhouetted Numbers' are extremely thin. Even though we can't see Nagi's horns that well they seem to be pointing straight up or at a 30 degree angle like that of the oni figures seen in traditional Japanese art. The silhouette's horns on the other hand are curved. I could be wrong but it doesn't seem like they're the same giant monstrosity.

All in all, I'm glad that the great scramble has begun and all the factions are confronting one another on the field. I wonder how Perospero is going to deal with his mother once he makes it to the event floor?

Thanks for the thread revival, @darkeningcloud ! I missed posting here.

The Minks Sulong forms weren't too exciting in my opinion either. Oda would have had to come up with too many exceptional designs for all those Minks. Carrot's Sulong form was excellent, so I hope at least Inuarashi and Nekomamushi receive more detailed and epic transformations.

Has really that many Numbers appeared that many? I thought the one from this chapter (already forgot his name, haha; the price of not discussing chapters on a weekly basis for a long long time) was the 2nd one after the young-looking one from the time Zoro, Kidd and Luffy first started to wreck havoc on the party.

I assume that, sadly, the Minks and Retainers vs. Kaido, Jack and others will mostly take place off-panel...

I really like your theory about Numbers, their names and origins!

Anyway, another thing worth pointing out is Big Mom's characterization - it's so consistent and never seems to fails whether she's her badass Yonkou self or the amnesiac O-Lin. She is hell-bent on destroying Luffy. It was something to see Prometheus being pulled back to her even though Nami still has some reign over him. And what about that final double-spread?! Brook was awesome, just like Franky-aniki.

You know that things are heating up when Luffy's watching all around; he's seen his crewmates fight in various situations, but never like this. This is their biggest challenge and it's showing through Luffy's reactions. He better focus on what's right in front of him, otherwise he won't be able to do anything about other parts of the battlefield.

Finally, it may be due to the Germa suit that Sanji was able to free Momo from the chains when Shinobu hasn't been. He's got quite a strong opponent in King, so we'll see how this develops.
You must log in or register to reply here.
Share:
Facebook Twitter Reddit Pinterest Tumblr WhatsApp Email Link
Top