Burn the Witch Chapter 4 "If a lion could speak, We couldn't understand": Spoilers and Discussion

Excelent chapter.
I'm hyped for Season 2.
I'm glad that in Japan don't exist the censor culture that is growing here in the west.
I wonder if next season will resolve all the plot regarding the Märchens, or if it will last until the end of the series...
Best part of the chapter was the moment between Noel and Balgo. So sweet.
I'm hoping for romance next season.

Polgarena said:
See, that's something I'm not sure about yet. Did Balgo really summon that sword out of his own power. Or was it Billy who tampered with the trumpet and when the sword appeared, he used it as a beacon in order to know where exactly to aim that shot.

I hadn't even considered the latter but it makes a lot more sense in retrospect. I'm with you on the beacon but I'm also considering whether or not it was used to distract the dragon and keep it from moving its head around. A sniper's worst enemy is a locomotive target after all.

Thank you everyone for your interesting and thought-provoking posts this week and welcome back Saiyan5ninetail! It's good to see a variety of viewpoints and differences of opinion expressed and I am thoroughly enjoying reading everyone's views. This week, most of the kooky-krazy-kawaii-kuteness disappeared, and I was able to (mostly) kick back and just enjoy the ride. Hallelujah!

Where to begin - the color page? Okay, I'll start there and get both the best and the worst out of the way first. I loved all the new designs and it was fun to see the plaids, tartans and symbology all showing up in one beautiful image. I agree with Polgarena that Roy is so very "Kingsman" kewl in his bespoke suit. And what a nice detail to have a stylized version of his Capricorn Zodiac emblem tastefully embroidered on the back of his glove. 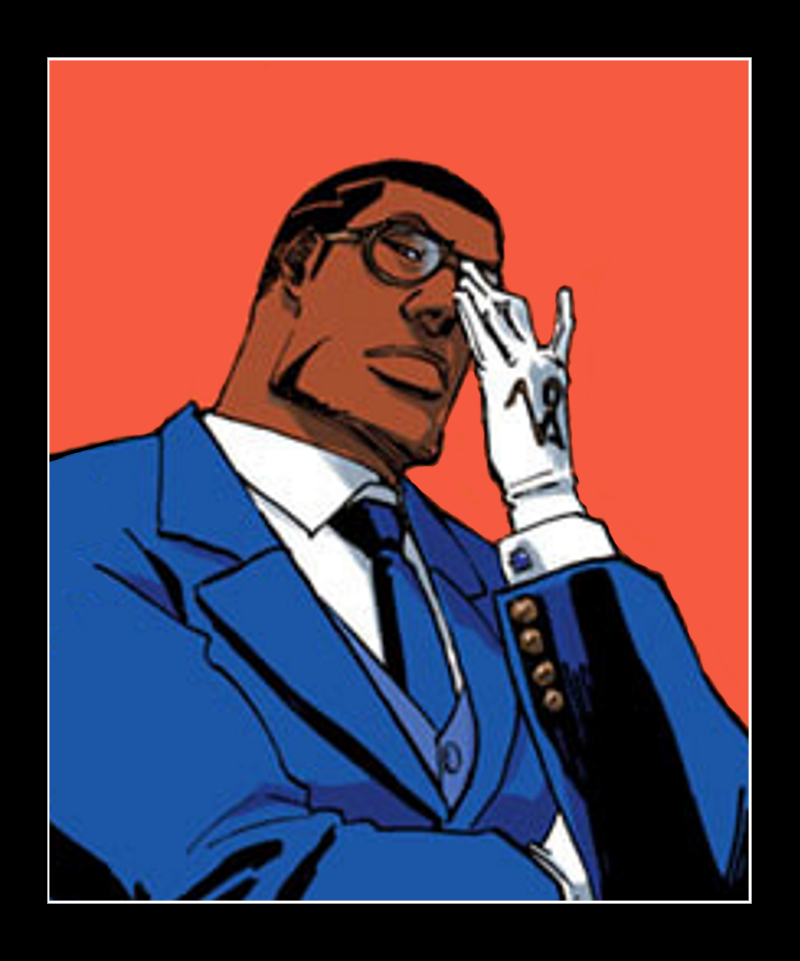 Harry Shayk is rockin' the green tartan, and is tres chic in his shades 'n' sandals. And as many have mentioned, Master Shayk looks very much like a hipster Urahara. 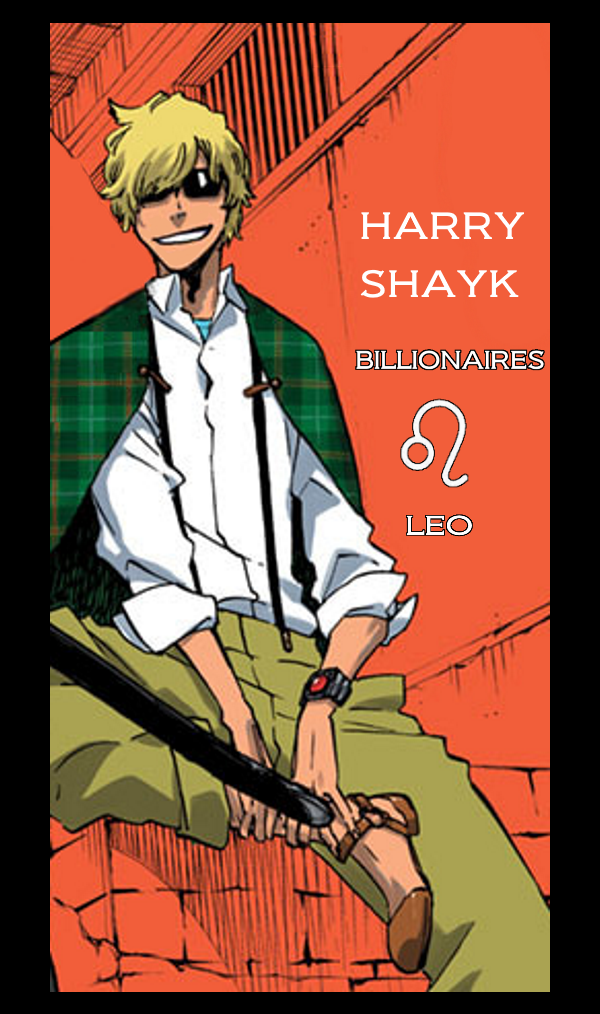 And to my delight, I realized that Tronbone's hat is the actual bell of a brass instrument, complete with valves on either side. Wonderful! 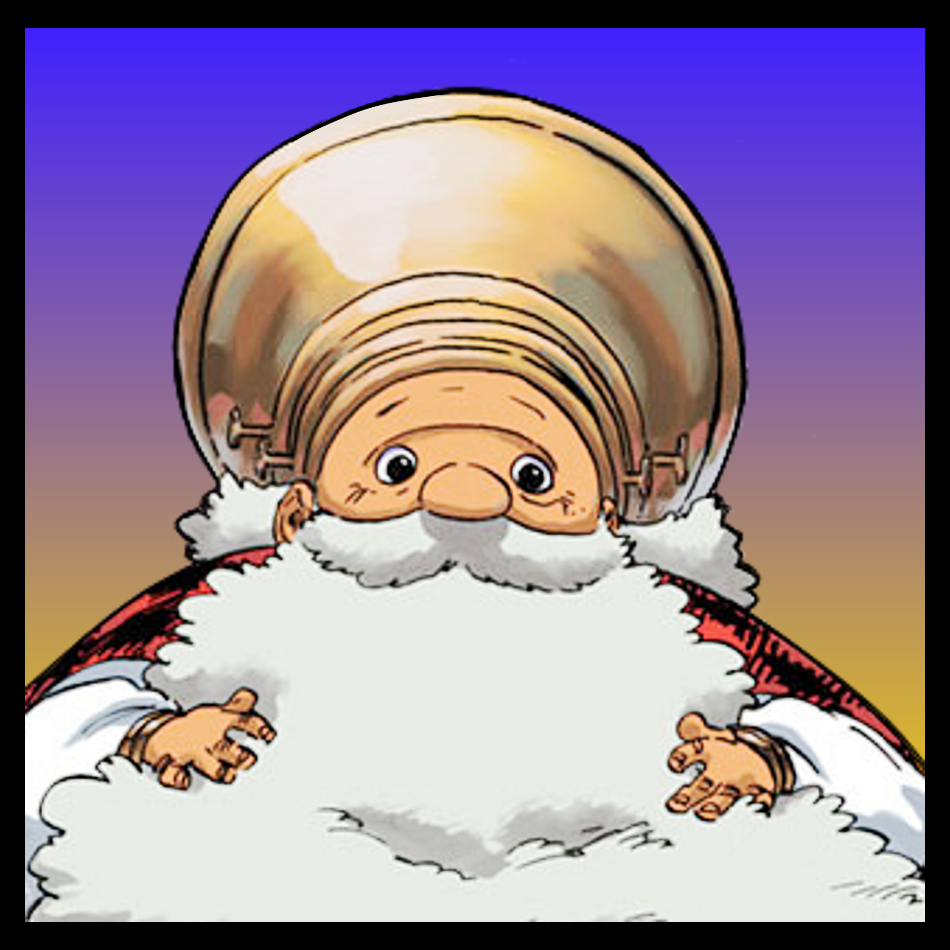 While Bruno is just awesome as a bad-boy, I must admit I wish he were in something other than blue slacks, with a blue jacket, and umm.. a blue over-shirt and uhhh... a blue streak in his hair. The guy is obsessed with blue - and Roy wears it better IMHO. I think he's hiding the "Houndstooth" pattern in his design in the Taurus emblem on his back. Now I suppose it could be baby bulls, but it could also be little hounds runnin' around back there... Whatever it is, it's a neat detail. You decide! 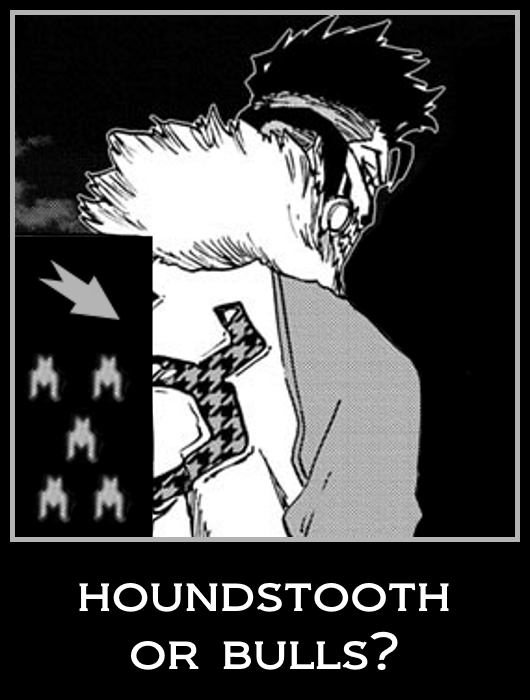 Much has already been said about Sullivan's Stormtrooper design - but at least the lightning bolt double S was not in evidence this week. Wolfgang was dashing in his Glen Plaid overcoat. And then there was Cquntnire Milieve... sigh .... I had such high hopes for her. When I first saw her single panel I thought for sure she was gonna be our very own Queen Amidala. 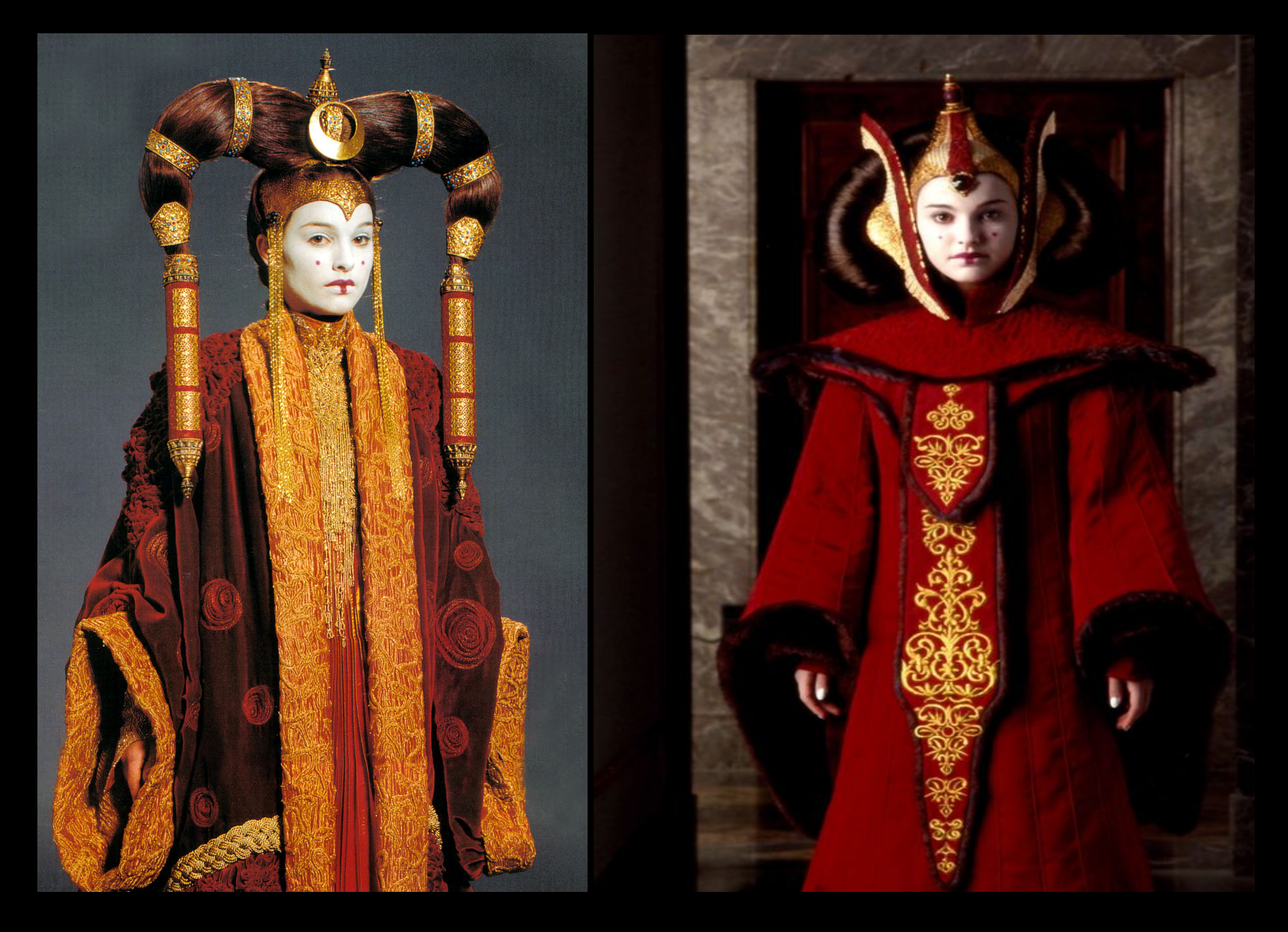 But alas, twas not meant to be. Now, I am not naive, nor am I prudish, but I literally had to stare at the color page for 10 minutes before I realized exactly what I was looking at. And I thought I must be wrong, so I waited to see what others said. Nope, I had it right - it was a gateway to another heart shaped gateway into the inner sanctum sanctorum of the Sacreds' Mystery. YIKES!

I suppose it's just BARELY possible that the Sacreds are a fertility cult... but... eww... Poor Ms. Milieve is so corpulently over-sexed that she's almost a grotesque. And she looks unhappy about it if you ask me. 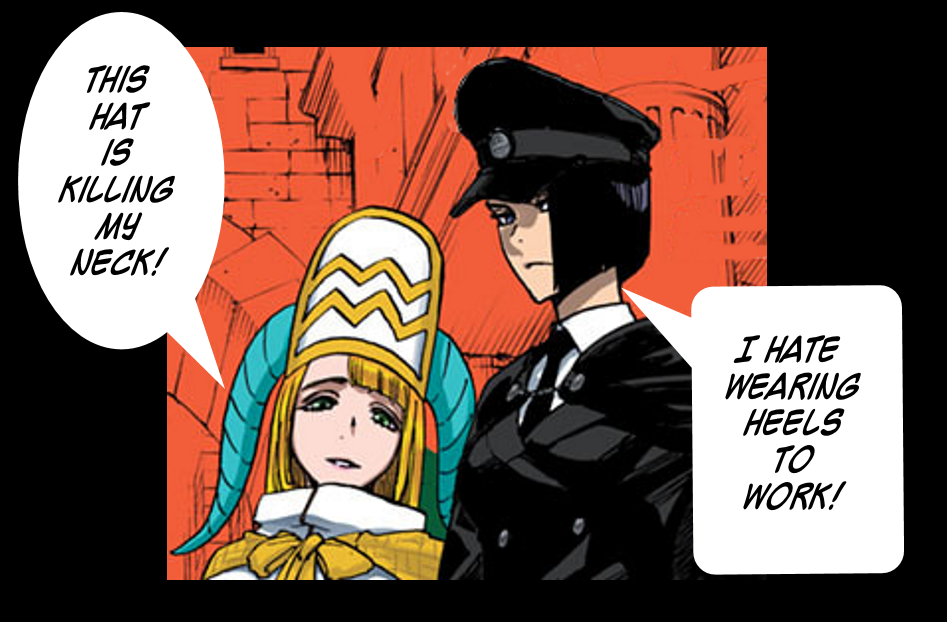 I can only hope they tone her down a bit for the anime.

Now on to better things, like the Chapter! I just loved it. There were FIVE double panel drawings if you include the color page, and I just feasted my eyes on the art this week - it was like the grand finale at a fireworks display. Everyone else has already pointed out the key plot points - I enjoyed all of it - but I really loved Bruno as a Tagger. Gotta love that he used "Inks Red" for his spell. 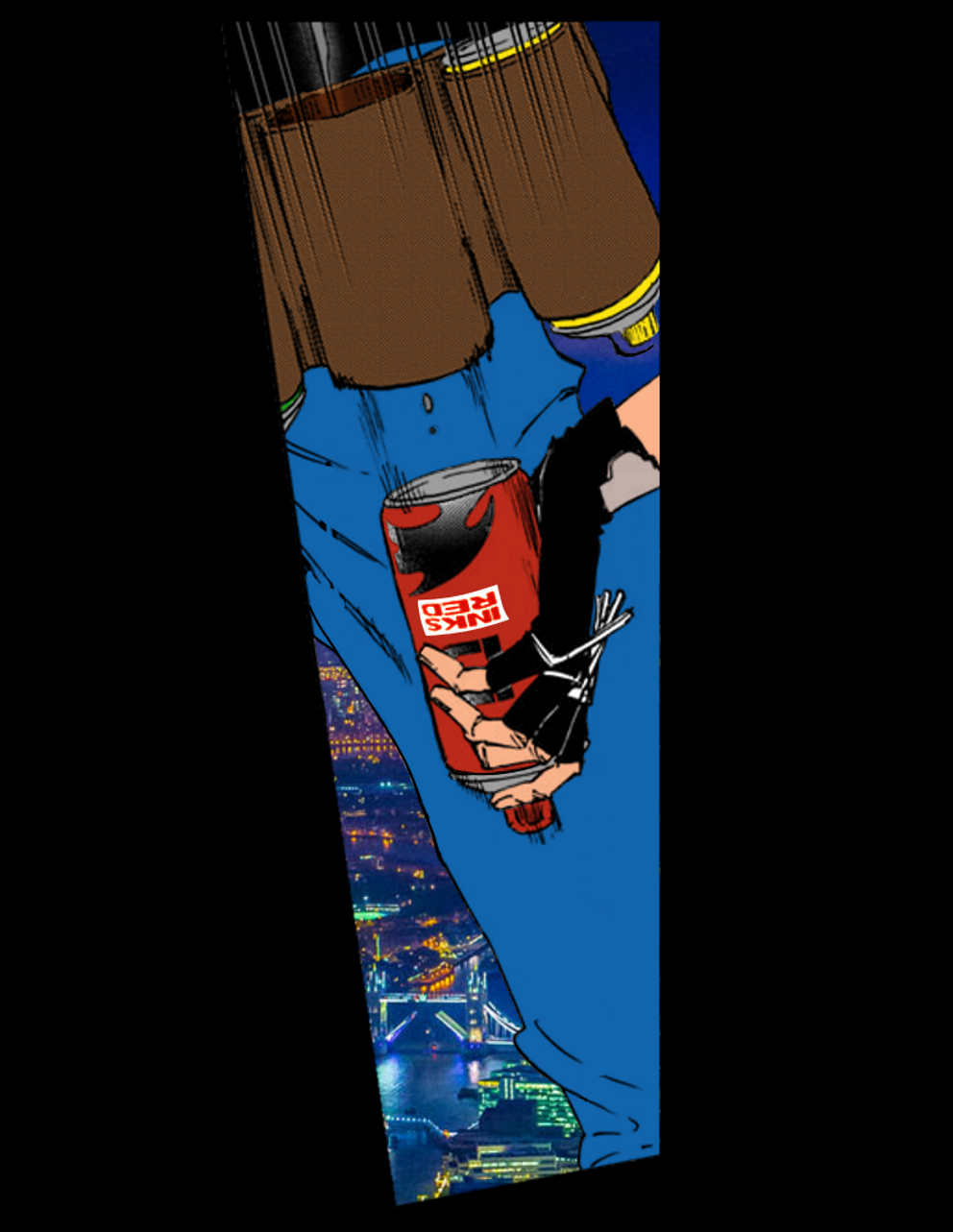 But even better was when he sprayed magic onto the flank of Rickenbacker. That was just, and yes I'll say it, epic. 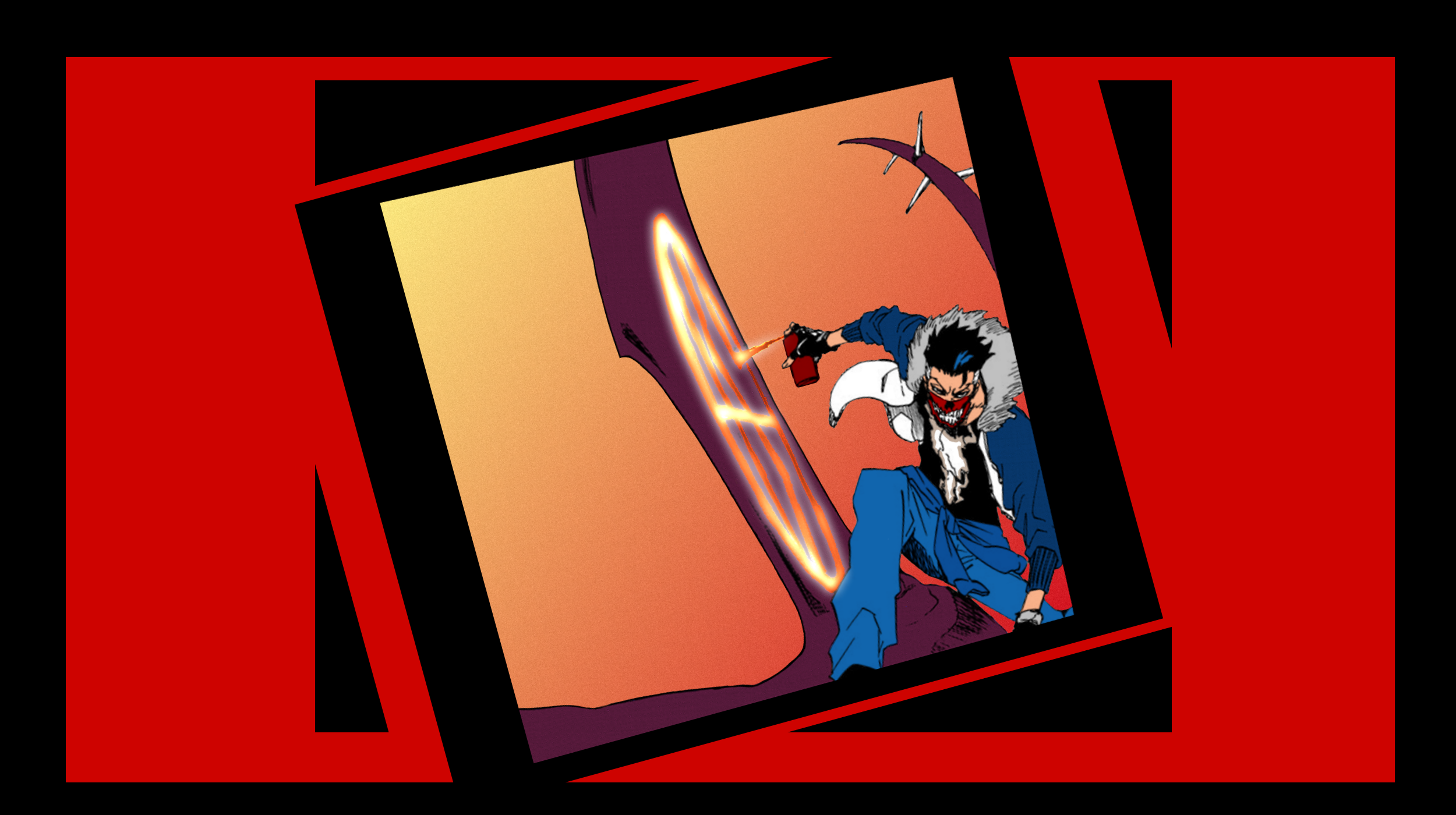 This series has barely begun and already I'm dazzled by the images.

I'm actually pulling for the Märchen dragons to not be evil, and for the ultimate liberation of all dragons from servitude! So, I remain circumspect as to that aspect of the story. I thought Cinderella looked fantastic, and I want her back in the future. We shall see ...

I'm not really looking for parallels to Bleach just yet, so no Hollows/Dragons/Quincies/Balgo comparisons for me at this time. I'm just taking this ride. So far it feels a lot different than Bleach, and while I would dearly love to go back and pick up those pieces, I'm also quite content to move forward.

I'm happy with the character development this week. Balgo was not such a tool and actually seemed redeemable and dare I say it, endearing. Bruno had his comeuppance and peeled off his bandages thoughtfully with a semblance of dignity. Ninny and Noel were wonderful in battle and displayed fine teamwork. Macy was fun as the comic relief. Billy Banks was unsurprisingly surprising, and leaves me wanting more, as does Sullivan with her mysterious veiled allusions to more lore to come. And the hug at the end actually moved me. It was shockingly unexpected and just right.

This has been a fun romp into Kubo-land. I didn't think I would like it at all and now I really do want more. I hope that our beloved mangaka can avoid the pressures of Shonen fanservice and not tick off every good woman I know, because I'd like my pals here to enjoy this ride with me.

I look forward to the streaming release of the film in October.

darkeningcloud said:
I hadn't even considered the latter but it makes a lot more sense in retrospect. I'm with you on the beacon but I'm also considering whether or not it was used to distract the dragon and keep it from moving its head around. A sniper's worst enemy is a locomotive target after all.
Click to expand...

I'm not sure anymore. It could also be a lucky coincidence: Balgo displays a surprising power - Cinderella gets distracted - Billy uses the opening.

It's interesting either way. I feel bad for Cinderella, but Billy shooting it and Sullivan figuring it out is such a plot twist and I love it.

Thank you for those lovely coloured panels, @NeoPlatonist ! I love how you added the London background on the panel with Bruno's cans. Roy and Harry are my favourite "Horns", based on their designs alone. Hopefully we see more from them in the future. And I agree with you, perhaps Kubo shouldn't have made both Roy and Bruno so heavy on blue.


NeoPlatonist said:
I thought for sure she was gonna be our very own Queen Amidala.
Click to expand...

Such a missed opportunity, especially now that you mentioned Queen Amidala.


NeoPlatonist said:
I'm actually pulling for the Märchen dragons to not be evil, and for the ultimate liberation of all dragons from servitude!
Click to expand...

Kubo wouldn't have added that "Why abuse Dragons" sign for nothing. I did think that people using that poor dragon as a bus was an overkill.

I also think that the character development was well-done this week. The hug at the end was cute.

I stumbled upon 2 interesting posts/theories; posting them here because I'm not sure should we have a theory thread for this series as well?

This post suggests we were teased with Cinderella from the beginning: https://old.reddit.com/r/bleach/comments/iskzav/they_teased_us_with_the_fairy_tale_thing_and/ 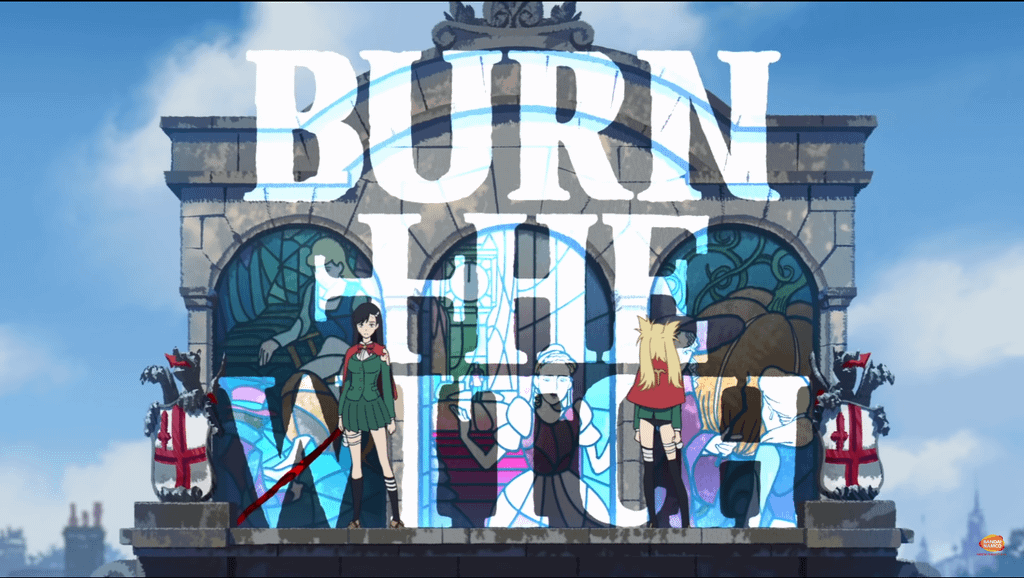 The image is from the 1st preview and you can clearly see details from Cinderella's story on the stained glass windows.

The 2nd post suggests that Balgo draws inspiration from a character from the Arthurian legend, that he is a descendant of Sir Ywain: https://old.reddit.com/r/bleach/comments/isub2v/balgo_ywain_park_the_descendant_of_sir_ywain/

I've only checked the Wikipedia page, but it's fascinating that Ywain is accompanied by a lion (Osushi?) that later saves him from an attacking monster.

One of the more random panels that caught my eye this week, was the huge empty hall at Wing Bind where Billy Banks Jr. sniped off his casual left-handed finger-blast at Cinderella.

This large, glass-enclosed public concourse sits on a mezzanine level perched above a lower dining room/lounge that is empty. There is a small, portable, room divider which blocks from view various miscellaneous filing cabinets stacked with old records. A lonely potted palm sits next to some conspicuously out-of-place old boxes stacked by the broad, floor-to-ceiling windows. There isn't even a chair or desk - just a deserted corner of an open space that is barely occupied or used. 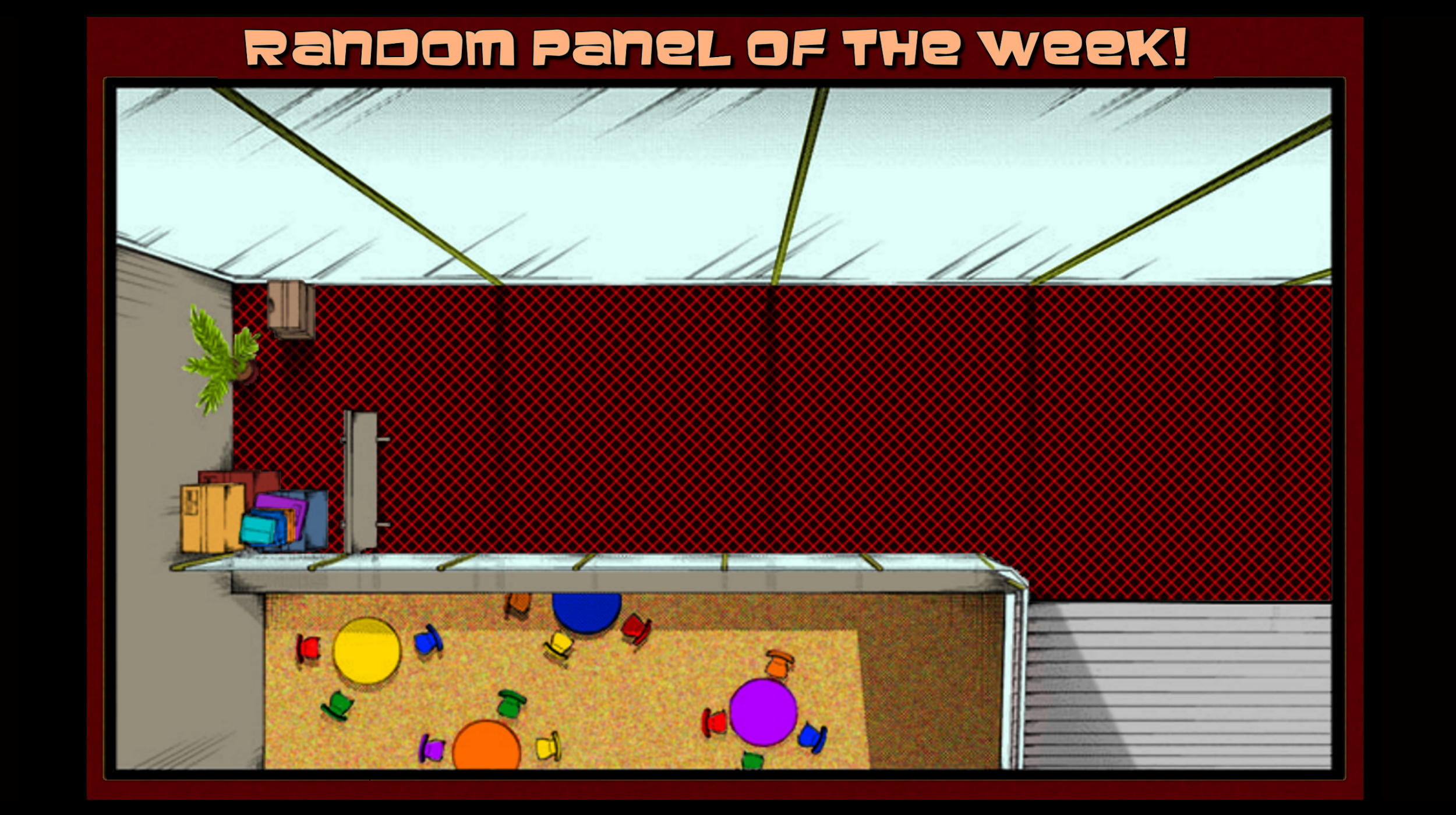 Those old boxes should probably be neatly stowed behind the room divider with the rest of the clutter and hidden out of sight. But someone has moved them recently...

This was not just happenstance. This location is nowhere near the office where we've seen Billy meet with Noel and Ninny. In Chapter 2 and later at the end of Chapter 4, we've seen Billy in his office surrounded by the usual office furnishings. 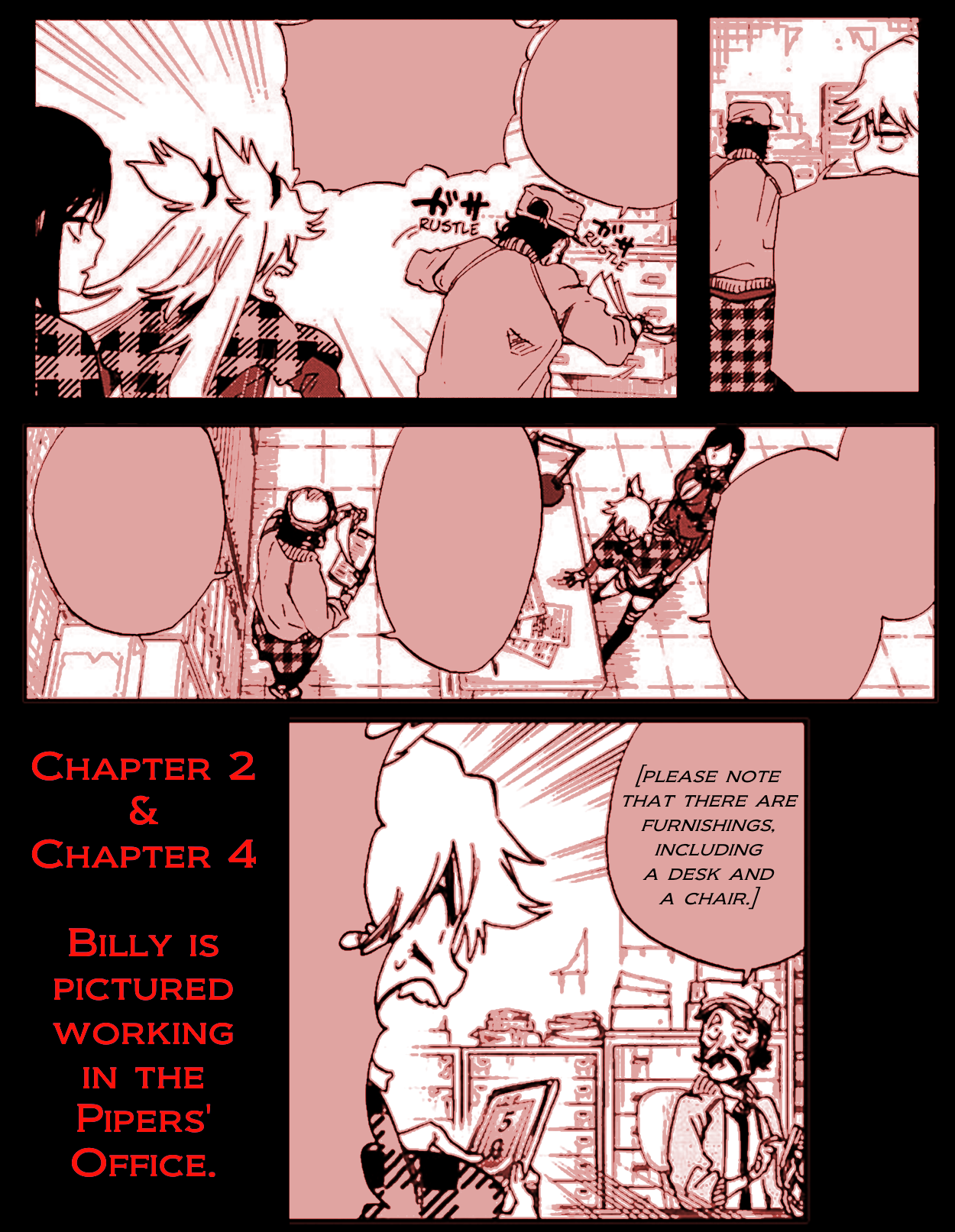 Later, Sullivan visits the scene of the crime. She tests out the indentation in the boxes where Billy rested his left elbow to steady his aim. And while we saw Billy nonchalantly act like this was all an accident, his choice of location and carefully placed aim belies that false innocence. He must've exited quickly, not even bothering to put the boxes back out of the way. This all required careful planning in advance with just the perfect deserted spot chosen. 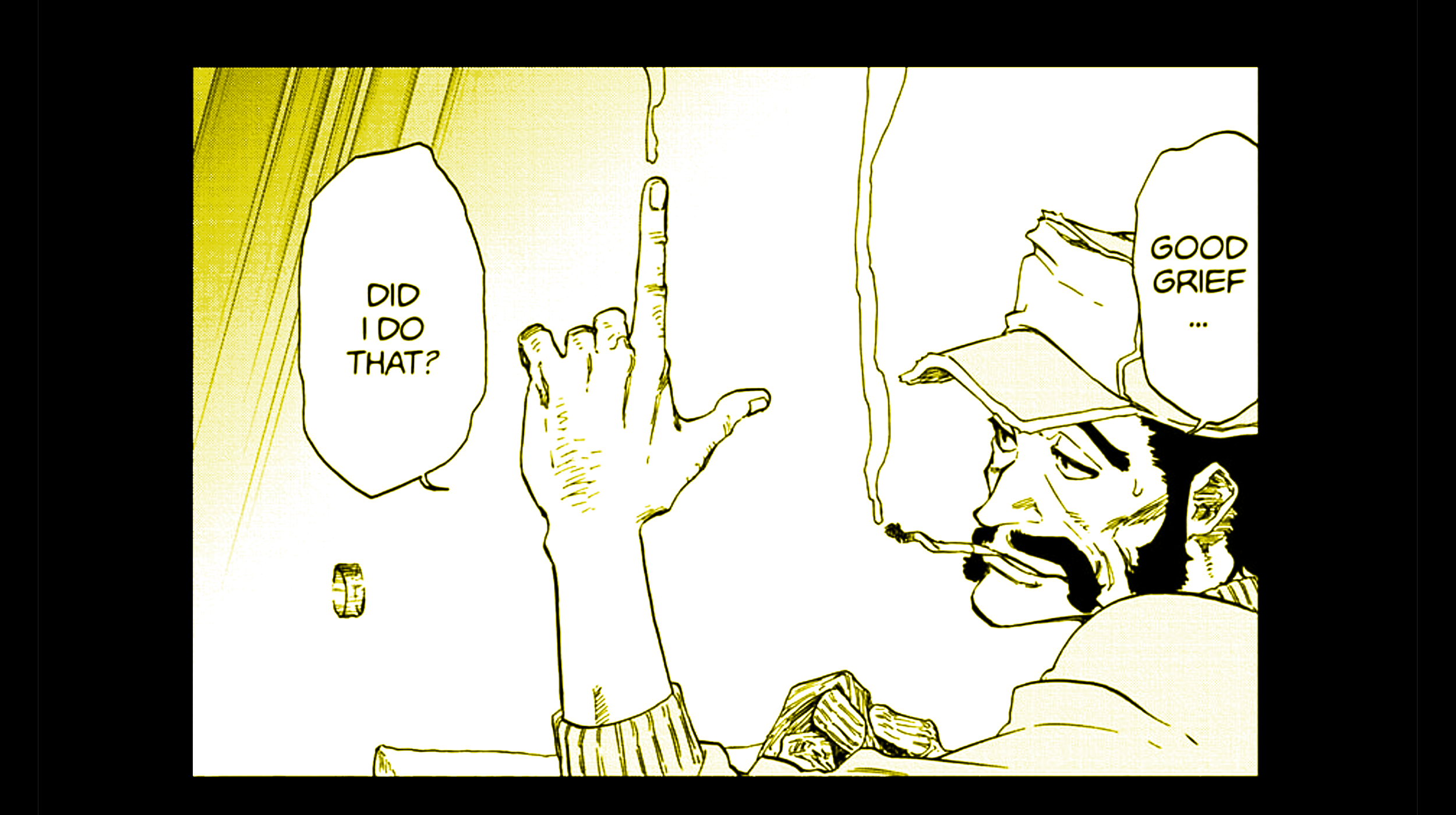 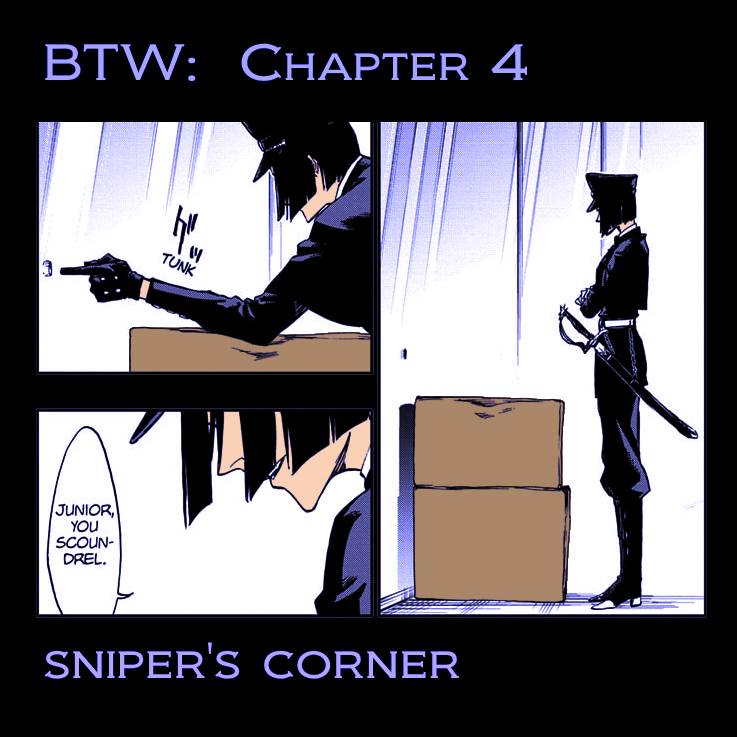 I really love it when little details like this that emerge from the art.
Last edited: Yesterday at 5:17 PM

NeoPlatonist said:
One of the more random panels that caught my eye this week, was the huge empty hall at Wing Bind where Billy Banks Jr. sniped off his casual left-handed finger-blast at Cinderella.

I was inspecting that panel while reading the chapter as well! It seemed so curious that above (what looked like a) cafeteria there's a gallery and not only that, there are those - as you've said - oddly placed cabinets and boxes. A palm even! Loving your analysis.

WSJ gets released earlier this week because is a holiday dedicated to the elderly in Japan, so Mangahelpers released the results of their poll earlier as well: https://mangahelpers.com/forum/thre...-discussion-and-toc-talk.3015155/post-5348255

-35 Poll Voters + 28 Comment Voters
-Tied mangas decided by which is older
-Total number of votes is the combined between both polls
-My Hero Academia was absent in this issue
Click to expand...

It's interesting to see that BTW chapter 4 shot up back to the top 5 compared to the previous two times when it was around the 9th position. It may be because of the new voting system they applied or because Boku no Hero Academia was absent. Either way, it was fun to follow its positions this way.