This stream was everything. So good. I can´t wait for Burn The Witch manga.

What a time to be alive..

B. Haddrell said:
Somebody translated the message from Tite Kubo during the presentation but it was very difficult to follow. Can somebody put the translation into this thread?
Click to expand...

Here is the image that was broadcast courtesy of a screencap posted by tari101190 at Bleach Reddit: 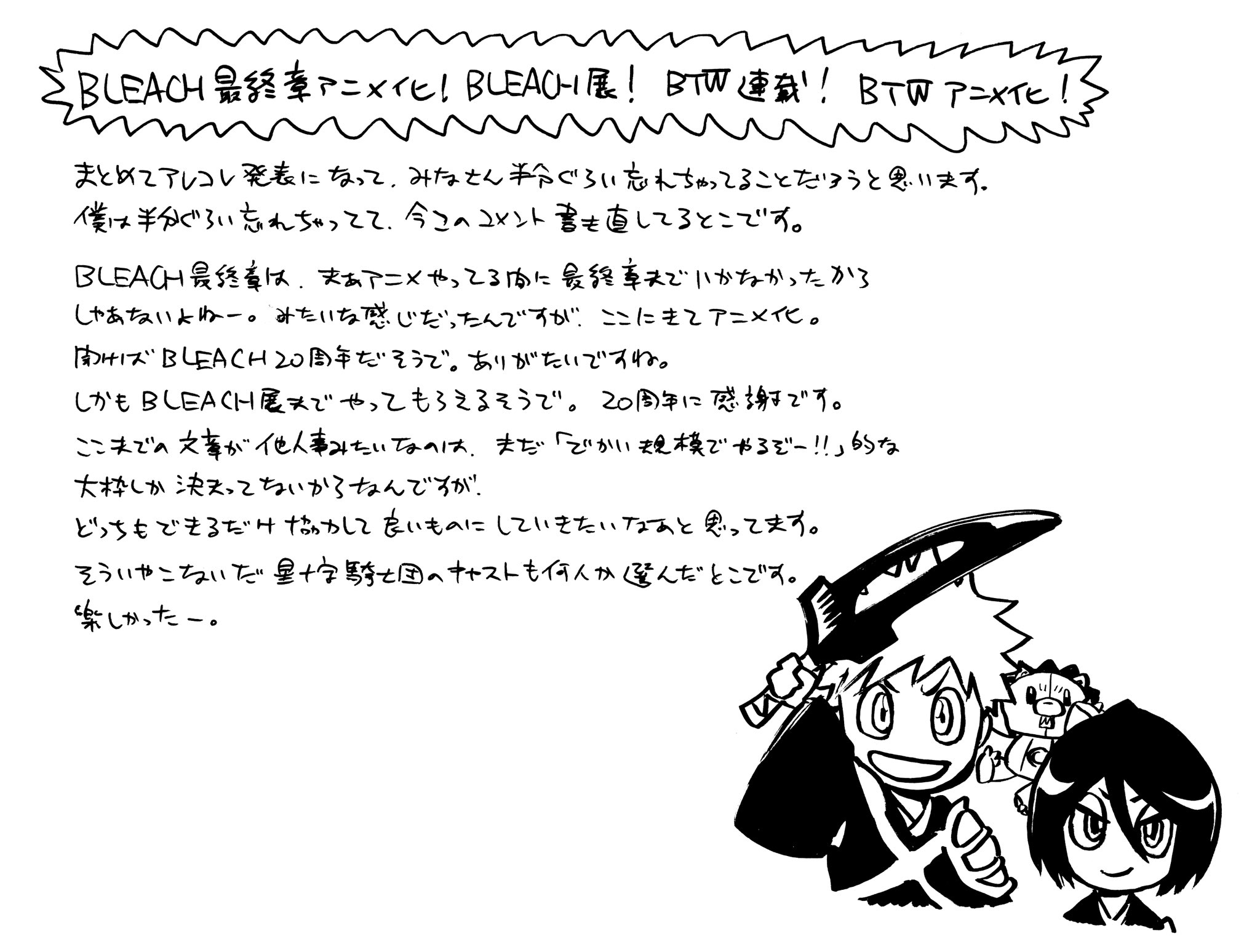 The live translator's name was Matthew? Mathieu? Not certain. But here is my transcription of what he translated live during the broadcast - including any errors he may have made along the way:

"We have a message from Kubo-sensei about today. I was authorized to give a translation that will be my own translation. It's not the official one, but Shueisha said it was okay. So, bear with me, this is not the official, this is my take on his words in Japanese. So, Morita-san is going to read the Japanese and I'm going to say it in English right now. So, this is from Kubo-sensei:

<<Wow - all these announcements! You guys - you probably have forgot about all this, didn't you? I say this because I had half forgotten about all this myself. I mean, the manga final arc - it wasn't there while the anime was running. So, these things kinda happen, you know? So, I just thought that the final arc would never be animated. I kinda gave up. But here we are after 20 years. I'm so thankful. And also to have a Bleach Exhibition next year for the first time, I only have like - I'm so thankful for the last 20 years. And to read a lot of these announce... to read ALL these BIG announcements - I feel like they're about someone else. Not me. I can't believe that this is all about me. I know there's a lot of ... uh... there's NOT a lot of details right now, but be sure that l'll do my best and I'll give all my best for all these projects coming on. Just the other day, we were casting a few voice actors for the Sternritters and it was super fun!>>

And the second part of his message is about BURN THE WITCH:

<<So, I only started writing BURN THE WITCH as like a side project, like as a distraction, as leisure, and showed it to my family and friends. And then my editors at Shueisha really, really liked it and also decided to do an anime around it and to make a full series in manga for it. So, I'm so excited. I feel pretty good about the result. Actually, I've already finished the manuscripts, so I can just chill and play [unintelligible] like ANIMAL CROSSING while all these come out. So, again it will be out in the Summer for the manga and Autumn for the anime. So, it's like, I'm playing - I'm chilling and playing ANIMAL CROSSING right now while these can come out. And I invite all of you guys to also play ANIMAL CROSSING while you wait for these releases.>> "

And here's the second half of the message also courtesy of tari101190 at Bleach Reddit: 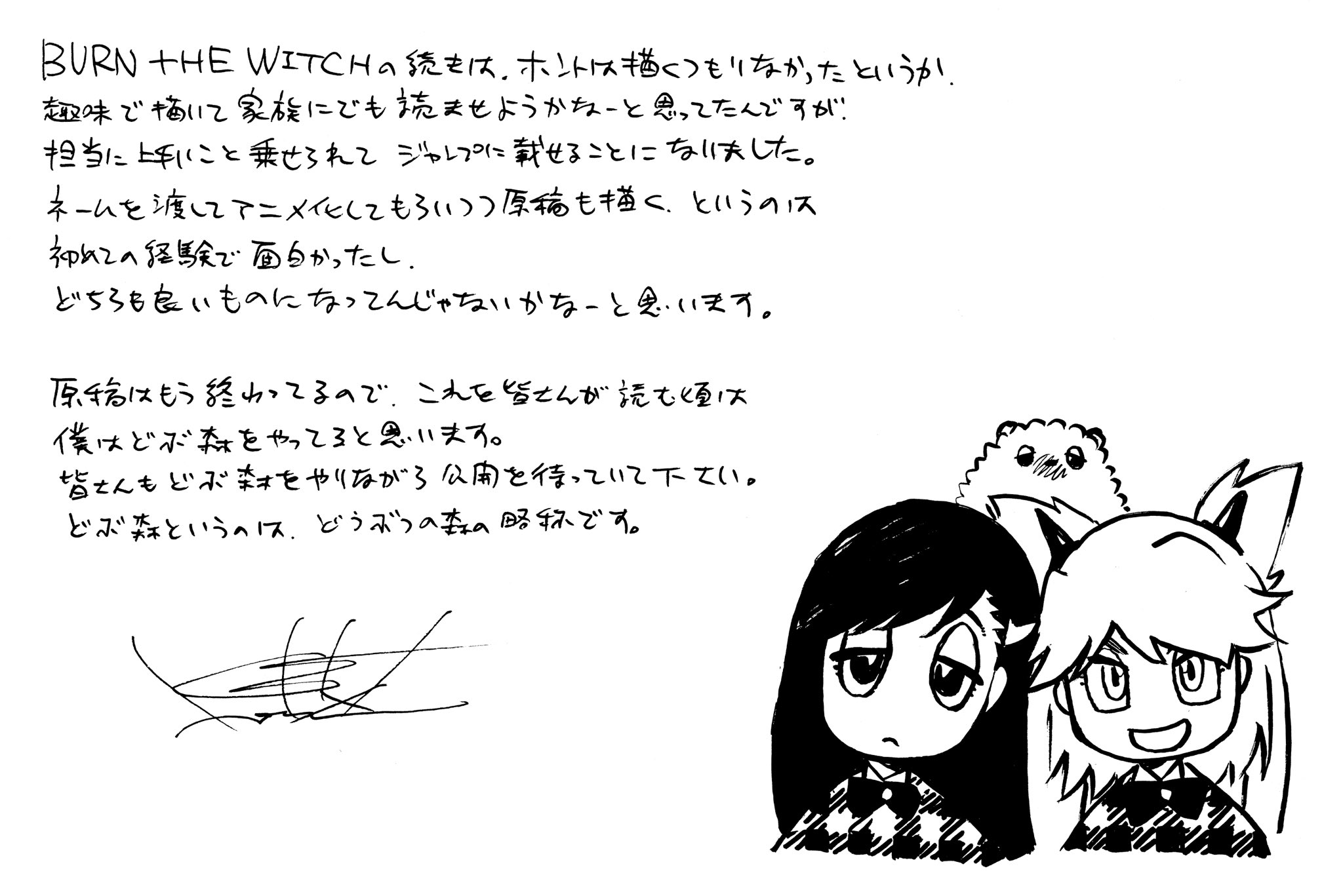 It should be noted that it appeared during the live stream that Masakazu Morita might have improvised a bit off the message as he was reading it and it was being translated. Therefore, please take this translation as loose and someone prolific in Japanese would probably generate a more accurate rendering.
Last edited: Mar 21, 2020

I have only only saw bits and pieces from the stream, but it looks like it was very fun. Thank you everyone for your contributions, be it videos, news or translations.

I will add the official sites.

The visual solutions, the graphic design is fantastic. So smart and spot on. Simple but also kind of rich. I love how the sites look. Kubo has also updated his Twitter profile picture with the 20th anniversary logo.

The logo, which looks like an awesome addition for the "A Cross to Bear" thread!

Burn the Witch will be published in the US


Burn the Witch Manga Will Be Published in the U.S.

I just hope with the adaption of the 1000 yr blood Gaiden, that Kubo gives the studio a detailed notes like Toriyama did. The ended arc left alot out since it was rushed. I want to see the first war between the Ywach and the original Gotei 13 as a filler arc. There were also too many off the screen battles in the Royal Realm that I wanted to see as well.

Looking forward for the new manga series and the anime adaption of the final arc. I just hope the anime can give the Sternritters justice, especially for Haschwalth.

I hope that Ryuken gets done justice in the anime, even if some parts of the story need to be changed to accommodate more screen time for him.

ishida said:
I just hope with the adaption of the 1000 yr blood Gaiden, that Kubo gives the studio a detailed notes like Toriyama did. The ended arc left alot out since it was rushed. I want to see the first war between the Ywach and the original Gotei 13 as a filler arc. There were also too many off the screen battles in the Royal Realm that I wanted to see as well.
Click to expand...

It would be ideal if Kubo worked with the studio, giving them notes on what to expand and where. Different people would like to see different aspects of the final arc explored better in the anime, but if anybody asked me for my opinion and hopes, I too would like to see the original Gotei, something from the first war, the Elite Sternritter vs. Squad Zero, that bigger battle between several Shinigami and Quincies that took place off-panel. Some other topics covered as well, like what is the Fünft Field Soken worked on during the Everything but the Rain. And so on.

But, those are all my personal wishes. I cannot bring my hopes too high, I can only hope that Kubo is willing to and has time to work with the anime staff and guide them through the process.
You must log in or register to reply here.
Share:
Facebook Twitter Reddit Pinterest Tumblr WhatsApp Email Link
Top